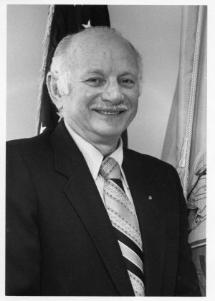 Lester Taube was born of Russian and Lithuanian immigrants in Trenton, New Jersey. He began soldiering while in his teens, first in the horse artillery, then as an infantryman for the remainder of his career in the US Army. In World War II, he was a platoon leader in the Bismarck Archipelago, attached to the 3rd Marines on Iwo Jima, then on Okinawa, the last battle of the war.

Recuperating from wounds and malaria, he left the army to run a 400 employee electronic company in California, a 450 employee paper stock company in Pennsylvania and then moved to Canada to open a logging and pulp-wood cutting operation.

Called back to duty during the Korean Conflict, he served as an advisor to the Turkish army, then as an intelligence officer and company commander. During the Vietnam period, he reached the rank of full Colonel, and was stationed in Europe as a general staff officer working in intelligence and war plans. While there, he opened a chain of coin-operated laundries in France that would become the largest in Europe. Prior to retirement from the US Army, he lived in a small village in Austria and kept a boat for several years on the Cote d’Azur, France. While there in France, he began writing action novels. After producing four books which were published in a number of different countries, and selling two for motion pictures, he stopped – “as there were children to raise and soldiering to do.”

Returning to the U.S. after 13 years overseas, he worked as an economic development specialist for the State of New Jersey until his final retirement. During this time, he also produced four more novels. He has four children all born in different countries.