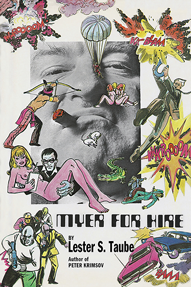 A hilarious satire that fills each page with laughter

Myer Ronis is a law-abiding citizen, a lover of poetry and peace, a man of duty who respects his sister and is polite to his brother-in-law and loves his mother. Can this same Myer Ronis be the hired killer, the merciless butcher of untold victims? Can Myer Ronis be the Assassin?

The Assassin travels to Los Angeles to make a hit, in other words, to fill some person with lead jujubes. The West Coast mob tries to stop him. They send Bogar, who eliminates people for practice, but the Assassin turns even him into goulash.

They send a helicopter, with twelve gunmen and thirty-four cases of nitroglycerine, but after the bang there is no helicopter and no gunmen. They send sixty top guns to meet him in Los Angeles, but somehow he walks right through them. Can a good boy like Myer Ronis be this Assassin? And if he isn’t, who is?

Myer for Hire is available from: Amazon.com, Barnes & Noble
and many other fine retailers worldwide