The Land of Thunder 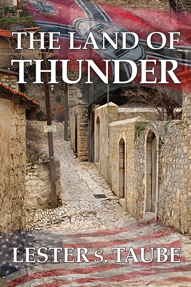 A Saga of love in brutal Germany.

A poignant love triangle between childhood sweethearts and their closest friend, set in Stuttgart, Germany, during the rise of Hitler’s Third Reich, this tale takes the reader on an emotional roller coaster ride of pain, despair, and eventually, joy.

Sweethearts, Marc and Lisbeth marry while their friend, Hans, who is a fugitive after joining Hitler’s aborted putsch in Munich, can only watch from afar as the object of his affection pledges her love to his friend. Later, the couple and their daughter move to Holland in an effort to avoid Hitler’s demoniac rule. Marc, on business in Switzerland during Germany’s conquest of Holland, learns his family has been swept up by the SS. Unable to make contact, he returns to Germany, hoping he can ransom his wife and daughter.

Apprehended by the Gestapo, he is told his family died in transit. Stricken to the core, Marc seeks only death. But the Gestapo tortures him to reveal the large sum of money they know he has hidden. After much suffering, he escapes to Switzerland, where he joins the American Army and returns to Europe as an infantry officer.
In the interim, Lisbeth and her daughter are enduring their own torments in a work camp where they are at the mercy of their sadistic guards. Just when things seem their worst, Hans, now a Waffen SS officer, becomes camp commandant and learns the two are prisoners. Still deeply in love with Lisbeth, Hans risks severe censure to keep the two safe and to look for information about Marc. He eventually obtains a Gestapo report stating that Marc has certainly died during his escape. Knowing that the inmates in the camp will eventually be killed, Hans must weigh his love for Lisbeth against his loyalty to his country.

The struggle of the three becomes an exciting story as the wheel of chance turns full circle.

The Land of Thunder is available from: Amazon.com, Barnes & Noble
and many other fine retailers worldwide