I Contadini (The Peasants) 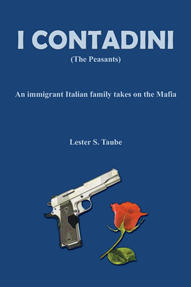 An Immigrant Italian Family Takes on the Mafia

A story of passion, suspense and violence.

Ettore DiStephano, an immigrant Italian stonemason, learns that his daughter, Maria, has been found raped and murdered. He calls home his children: Vincent, a judge; Michael, a surgeon; Anthony, a priest; Rose, wife of a business tycoon; Paul, an army colonel; and wild, deadly, Dominic, an engineer with wanderlust.

Disdaining American justice, Ettore insists that the family find the killer.
Jim, the tycoon son-in-law, joins the search. Then his wealthy niece, Bonny, a spinster anthropologist, falls madly in love with Dominic, and demands to help. Soon, one suspect stands out. Tracking him down takes the family to foreign countries, where guns explode and men die. Then, as the action thickens, they find that beneath the veneer of their professional exteriors is the pelt of their father, a contadino, and that his mission is correct.

When the confrontation gets out of hand, both sides mass their strength for the inevitable showdown.

I Contadini (The Peasants) is available from: Amazon.com, Barnes & Noble
and many other fine retailers worldwide