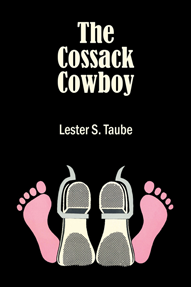 Can a Cossack conquer the West?

Paul Sanderson, a thoroughgoing young Victorian gentleman, is having a high old time with a regiment of Don Cossacks, fighting, raping, pillaging and burning in the time-honored manner, when he is recalled to England to inherit a dukedom. Soon he is on his travels again, this time to the Territory of New Mexico where the old Duke had bought but never taken up the Three Barbs ranch.

Unfortunately, Paul is not the only person who is interested in that particular piece of real estate, and he soon learns that a land-hungry railroad tycoon wants to have him killed to possess it.

What happens when Paul meets the daughter of his would-be assassin on a wolf-infested mountain, starts a chain of horrific events that will keep the reader on the edge of his chair right up to the startling climax.

The Cossack Cowboy is available from: Amazon.com, Barnes & Noble
and many other fine retailers worldwide