Enemy of the Tzar 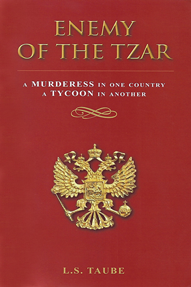 It is Tzarist Lithuania in 1904. Hanna Barlak is an 18-year-old seamstress in a small village, the sole support of three young siblings. She is in love with Stephen, a Russian university student.

Innocently implicated in a plot against the Tzar, she must flee her homeland with Jakob, a Hasidic prince. In Germany, she learns that Stephen and the children have suddenly disappeared, and that the dreaded Okhrana, the Russian secret police, have sworn revenge.

Using her sewing abilities, she builds up her trade, spending all she earns to protect Jakob and herself from the Okhrana and to search for her loved ones. World War I makes her a wealthy woman, and in later years, she becomes a tycoon fighting for her very existence against the Krupp Munitions Cartel, her emotional feelings for Bernard, a Dutch doctor, and the wrath of the Nazi regime, whose goal is to destroy her.

Enemy of the Tzar is available from: Amazon.com, Barnes & Noble
and many other fine retailers worldwide